Sometimes a government wants to forget some information about the illest things done to humanity. Some people were earning a load of money not just because they needed it, but their greed put their fingers into psychiatry that fully was just out for profits. And maybe it still is. Somehow I was able to find the information available through the internet from some other place. But it’s all written in the Norwegian language, and somehow you still can get the information. But what information was lacking, you might understand after downloading and looking further down this page:

On this site below, you get the new information. But it’s highly misinformed and less of what the actual information had been from before the state started to remove certain information by wanting to forget foolishly. Probably some politicians still might have dirty hands into this actually to do such procedures. You’ll never know if you did not look at the chain of problems.

Regjeringen.no lacks a lot of information, especially about the electrodes experiments. And it’s more content in the PDF download that I managed to scavenge through the internet. You will have to use several other ways to understand it, but there is a special covered youtube video about these subjects, and there are several of them, but this is the first one in the row:

All who were in psychiatry up to 2003 were conducted with special types of research, and some are still in the psychiatric system. As well as the medicine is still yet available from these years, and newer discoveries tell us that Schizophrenia is just immune system fault, where interleukins from the immune system cause problems to the brain or actually the dopamine system. And in such means, I know that a cure to Schizophrenia would be to kill the shizzocock occupying the brain system state. To heal Schizophrenia, you would need to kill the bacteria, fungus or parasite that activates the immune system:

You can still read my further research on it:

You can now download above the full statements on the case LSD, Electrodes on Norwegian Psychiatric System, but you will not fully know what was happening before 2003. I was a patient from 2001 till 2003. The research they were performing as the last were voices among many patients that section of time. Until I bet my thumb by hearing voices, it ended somehow in 2002. And I never heard anyone hear voices in the head. Most were simulating them as they were that time, but most just lied to stay in psychiatric.

As well know the contracts initiated on such means as even Dead man’s button. These probably were the buttons to control people and kill them if they didn’t want to fulfil a grant from Satan. That, in fact, would induce a possible way that Hillary would be a killing machine for the CIA and do all that they wanted her to do. If so, Russia wasn’t the CIA? Some books tell about the infiltration from Poland where very educated people were to be enabled to steer the world into misery. And that, of course, is the fact of today, with even the leftist types of artificial people educated to rule the world. Being a source of centre education was dismantled since then in all countries and Poland was the highest education centre up to the year 2000. And many CIA agents are to believed to be educated in the middle of this country. As of that, all countries suffered a mere deconstruction by fanatism since the year 1990. And above grief, a vengeance world with the destruction of Godly belief. That, in fact, can be destroyed by the centre of populism, and most likely, Poland was the root of it all.

These were the contracts initiated at that time, and they got much to earn about that, several corrupt politicians to earn million dollar contracts by approvements to these:
You never know how some have millions in their possession still these days. As most in the ArbeiderPartiet has attained several incomes of this: 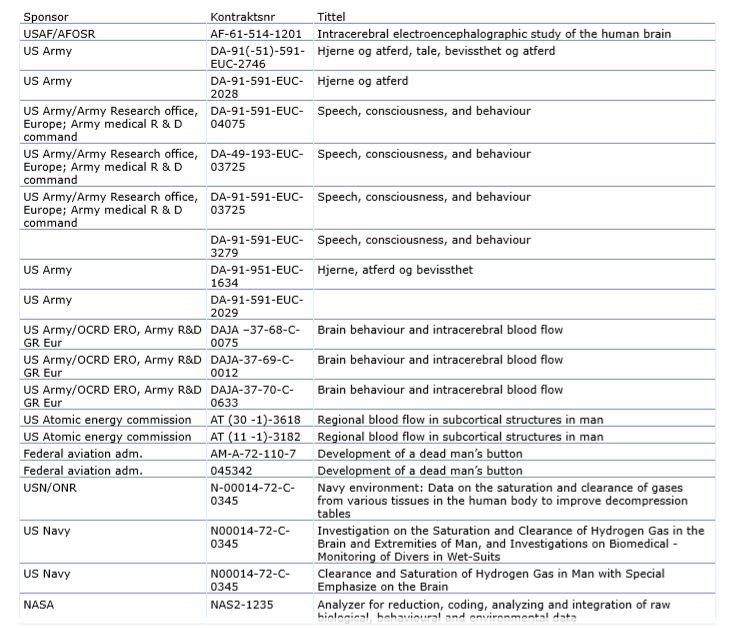 And all of that, You never know when they used PCP on the subjects in Psychiatry. You never know when a pill was something else than intention. Especially before 2003. You never know what was done to research new types of medicine if it worked or made us strangely wrong, or at least they were fatal as perhaps you have the medicine called Truxal, which has the side effect; Sudden Death.

Here is part two of the video on Youtube:

They performed actually many different styles of procedures towards the people in Norway since it was given a pass for military or CIA in the USA by ArbeiderPartiet to perform several inventions and research. Many of my friends were violently researched by the use of punishment even up to the year 2013. In 2015 they closed the research centre in Lier in Norway. Since then, people still have bigger problems in their life. Many were buried in Mass Graves in Norway up to the year 2000. Much of this secrecy is still about people being as well working about these researches even are working with dangerous methods, many of them aren’t in jail or otherwise elsewhere. But they inflict damage by wrongdoings as they have no other way to be insane. People like perhaps Anne Lill Ørbeck still performs wicked experiments of punishment on her patients. She lost her job in 2014 in a specific county, but the problem is that she is still working in Psychiatry, even as a neuroscientist with insane methods in another county. Insanity still consists in them within.

Here though, you might learn several of these issues in the past: